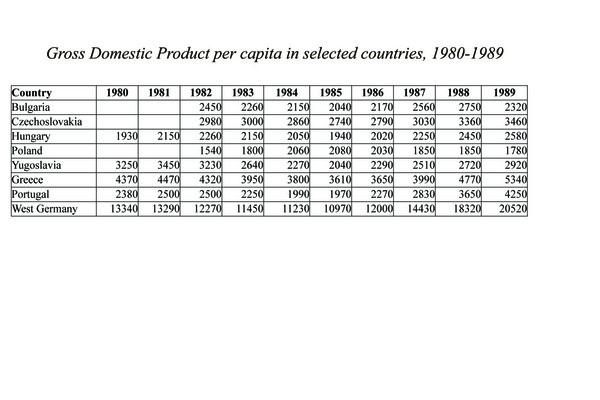 The recession of the early 1980s caused significant disruptions in the economies of all European states, whether Communist (above the double line) or non-Communist. The data in this table show how even in West Germany, from 1980 to 1985 gross national product per capita decline across Europe. However, by 1986 the recession in Western Europe had largely ended, much of Eastern Europe was much slower to recover from the effects of the recession or, as in the case of Poland, their economic situation improved slightly in mid-decade and then slid again toward the end of the decade.

The data here also indicate the economic disparities between Western and Eastern Europe. Greece and Portugal were included because like Hungary, Czechoslovakia, or Bulgaria, they were smaller countries. A comparison of their GNP per capita and those in the smaller East European countries indicates the growing economic disparity between East and West. The Federal Republic of Germany (West Germany) is included here to demonstrate how much stronger the West German economy was than those just to the East.

When you compare the economic situations in Eastern an Western Europe, what factors do you think were most important in leading to these differences?