The Executive Abroad is an innovative interactive map and data visualisation platform that provides a cartographic record of the travels of two members of the executive branch of the United States government—the President and Secretary of State—from 1905 to 2016. Part of the broader American Panorama project that seeks to provide an atlas of the history of the United States, the platform is a valuable tool for those interested in one facet of American foreign policy.

Beautifully-designed with a fully-interactive interface, the website combines a globe, chart, timeline, list of US Presidents and Secretaries of States, and search bar that visitors can use to navigate through the painstakingly reconstructed data of the travel itineraries of the executive’s most senior foreign policy officials. In the first instance, visitors can switch between the two offices by clicking on ‘Presidents’ or ‘Secretaries of State’ which alters the colour-coded points on the map that they travelled to as well as the surrounding chart highlighting the corresponding number of places visited as well as places visited. Similarly, clicking on the name of an individual President or Secretary of State shows only the overseas trips they went on but with a more detailed timeline of their travels. An alternative means of exploring these journeys is to click on a point on the map, which brings up a comprehensive catalogue of visits by US Presidents and Secretaries of State in chronological order. Considering the density of points on the map, visitors might perhaps also consider using the location search bar to filter for individual locales they want to learn more about. For those looking for an introduction to the map, they can click on ‘About This Map’ which produces a pop-up outlining the history of travel by US executive officers as well as acknowledging those who contribute to the making of The Executive Abroad.

The project draws on a wide range of sources including data from the Office of the Historian and the US Department of State as well as Richard J. Ellis’ book Presidential Travel: They Journey from George Washington to George W. Bush. On the level of individual visits, the website includes the dates of travel, the specific places where the President or Secretary of State visited, reason for visit (if available), events they were taking part in, and dignitaries they met.

Teachers can utilise this resource in a number of interesting ways. In the first instance, it serves as a much more interactive and visually appealing record of how two of the United States’ most powerful members of the executive branch engaged in foreign policy over time. Alongside the more straightforward use of the platform as a database for students to consult, educators can also train students in data analysis. The chart is a particularly valuable tool as it is a means by which students can be taught to identify patterns of which countries or regions successive American administrations have decided to engage with and how that has changed over time. In combination with secondary sources, this can be a great way to get students thinking about the ways in which the United States engages with the world.

A visually stunning piece of historical cartography, The Executive Abroad provides a model for how we can map and visualise mobilities through the lens of how American political elites have travelled the world since the early twentieth century. 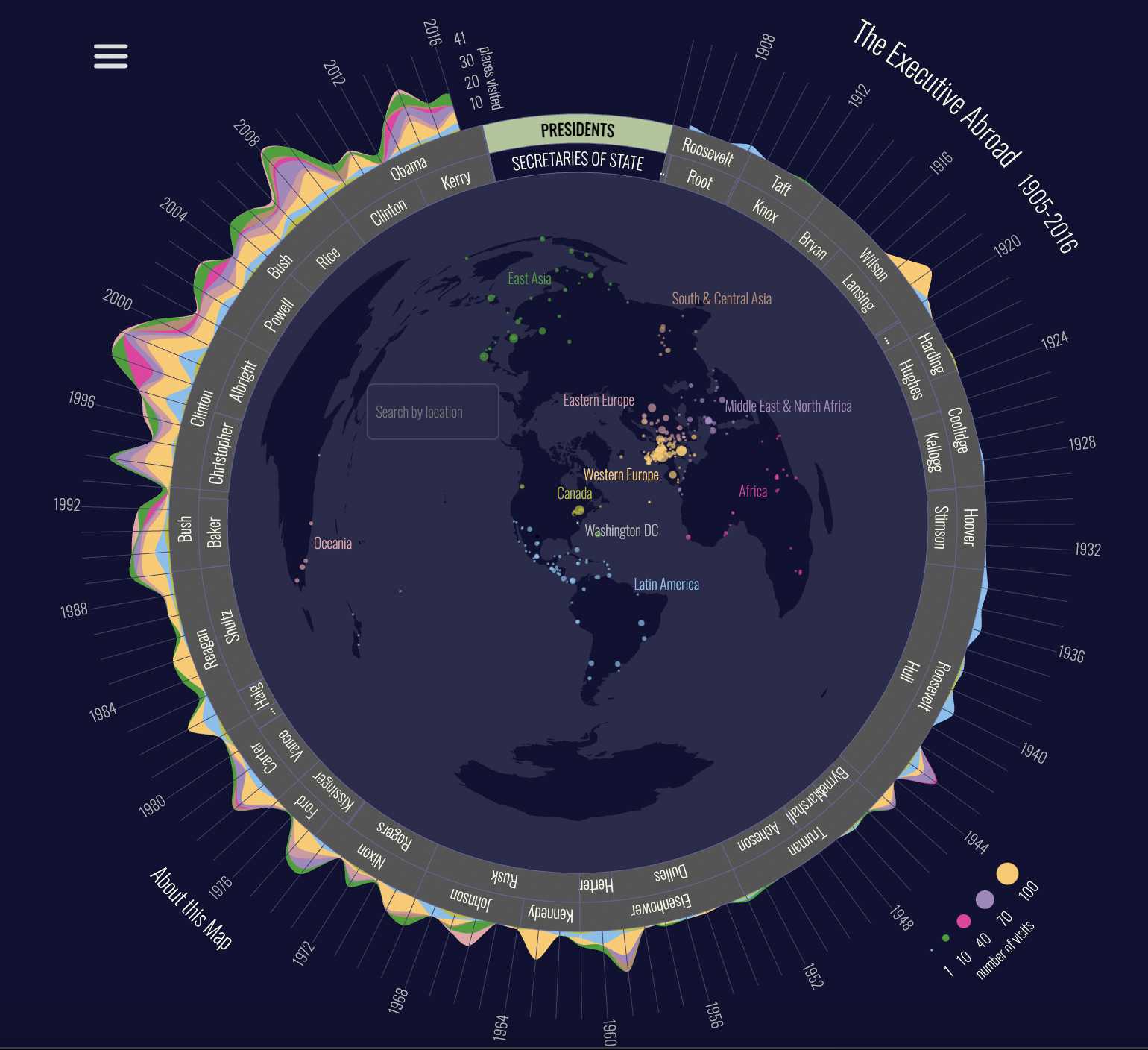 “A visually stunning piece of historical cartography, The Executive Abroad provides a model for how we can map and visualise mobilities through the lens of how American political elites have travelled the world since the early twentieth century.”