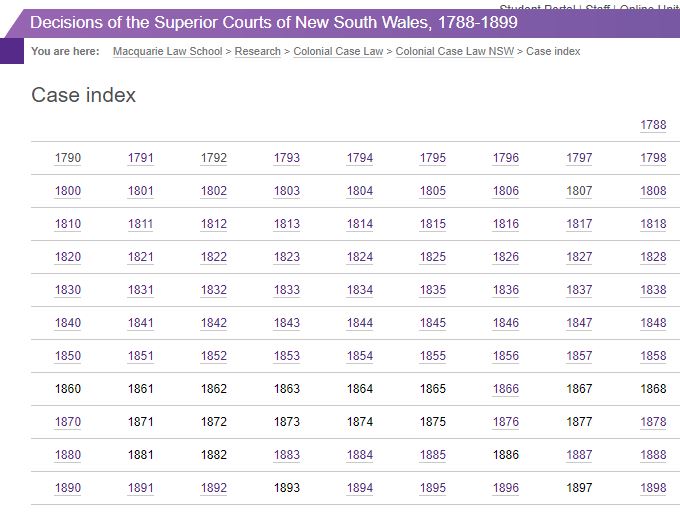 “Legal records are a key resource in gaining access to the voices of the non-elite, providing a rich repository of the details of life in the period. The subject index is particularly useful in drawing themes together for teaching.”

This site currently includes more than 1,000 transcriptions of selected cases heard by the superior courts of New South Wales, primarily between 1824 and 1838. These are not law reports in the modern sense. The transcriptions are based on the reports of contemporary newspapers, the best surviving source for legal decisions in colonial Australia, with some reference to archival documents. The cases were edited and selected by Bruce Kercher, Professor of Law at the Macquarie University School of Law, Sydney, and author of several books on the history of law in Australia.

Cases may be searched in two ways—by case index (divided into yearly blocks) and by subject index (divided into alphabetized time blocks). A separate list offers “Cases concerning Aborigines.” More detailed search functions are available on a linked site, Austlii. Cases appear on the Macquarie site first, and are subsequently added to the other site.

The criteria for selection of cases are influenced by the requirements of both legal and social history, as discussed in the “Introduction.” Decisions involving more than trivial points of law are included, in particular cases which involve the adoption or otherwise of English law. All cases concerning historically “prominent” people, a concept not confined to members of the elite, have been selected, as have cases with reference to the rights of women, convicts, and Aborigines. At least one of every kind of case is reproduced, even when it does not meet the above criteria.

In addition to legal cases, the site also contains an eclectic collection of material pertinent to the history of the period under “Other Features.” These include music composed by New South Wales Chief Justice Francis Forbes in 1820, the 1839 poem “A Convict’s Tour to Hell,” the 1790s diaries of Richard Atkins, Judge Advocate of New South Wales, and the 1830s letters of Justice Burton of the New South Wales Supreme Court.

The site is aimed at general historians as well as at legal historians and lawyers. Legal records are a key resource in gaining access to the voices of the non-elite, providing a rich repository of the details of life in the period. The subject index is particularly useful in drawing themes together for teaching. In approaching courses in world history, teachers can use this site to discuss the way in which law intersects with the emergence of free societies from penal settlements. This process should be understood in a global context since it involves wider 19th-century questions such as the rise of free trade and free labour ideology and bourgeois models of respectability. Comparisons can be made with slave societies and colonial circumstances more generally. Since a particular effort has been made to include cases relating to Aborigines, this site is an excellent resource for courses dealing with the topic of indigenous/settler relations. The site is accessible for student research.

Teachers who use the site should be aware of some limitations. Apart from the four-page “Introduction,” the site does not contain extensive background material or consistent contextualization. Although the footnotes to individual cases are illuminating and can run longer than the cases, this varies according to example. Teachers are advised to use this site in conjunction with a general survey history of the period such as Jan Kociumbas, The Oxford History of Australia Vol 2: Possessions, 1770–1860.1 Studies which focus on the law in colonial New South Wales from a social history perspective include Bruce Kercher, Debt, Seduction and Other Disasters: The Birth of Civil Law in Convict New South Wales and David Neal, The Rule of Law in a Penal Colony: Law and Power in Early New South Wales.2