The website began as an exhibition of more than 200 items. The site introduction promises a look at the relation between image and power, from the time of Charlemagne to the time of Charles de Gaulle. Perhaps Gallic weariness intervened: the website has no item later than the 1920s. The site divides this 12-century period into four parts: “Monasteries and Monarchs,” “The Path to Royal Absolutism,” “The Rise and Fall of Absolutism,” and “From Empire to Democracy.” The French Revolution is not represented in the exhibit. On the other hand, the site abounds with images of French kings (Louis XVI is absent, of course) and with gorgeous illuminated manuscripts. As with other Library of Congress websites, text is not the point. This site is a feast for the eyes, and what we are given more than makes up for the absence of text and transcription.

One way to use this site in a classroom might be to have students compare the evolution of representations of the king. Charles V is pictured sitting at a scholar’s desk, beside a curious library table overflowing with books. Since this image comes from a translation of John of Salisbury’s Polycritius, commissioned by Charles, it seems fitting that he is pictured as more scholar than king. Students, however, will certainly notice that his robe is covered with the royal fleur-de-lys. But what are those curious carved animals at the arms of the desk? And what kind of beast is lurking in the upper left hand corner of the folio?

Many hundreds of years later, Francis I is pictured as “both Mars and Minerva,” burdened with more symbolism than any one king should have to carry, but he looks faintly amused by it all. His successor, Henri II, is shown in a very “architectural” portrait, and seems to be blessedly free of the symbols of divinity which burdened Francis. But don’t be fooled—his anointing of the ill, an ancient tradition among French monarchs, asserts the divine healing power of the king’s “royal touch.”

We have two images of Louis XIV, as befits a site that focuses on absolutism. The first is his dancing costume for the ballet—Louis was the first to dance the role of Apollo, the Sun God. The second image depicts the king as a Roman warrior (not emperor) and the soldier’s tunic shows his legs to good advantage. This second portrait is a good indicator that Mel Brooks did some serious historical research before taking on the role of Louis XIV in his History of the World, Part I; in the film, Brooks’s resemblance to this portrait is uncanny.

As Louis XV follows the Sun King, Roman virtue seems to give way to Rousseau-ian sensibility. The fleur-de-lys does not appear here, and Louis’ wavy hair and dreamy eyes make us think less of the king and more of the man. Finally, for the post-Revolutionary King Louis-Philippe, we have the famous “Metamorphosis of Louis Philippe into a Pear,” a series of four illustrations worthy of Jules Feiffer. It would be unfair to examine these portraits without also remarking upon another item in the collection, The Adventures of Telemachus, a work produced by F. de Salignac de la Mothe-Fenelon for his young charge, Louis XIV’s grandson, to encourage him to behave prudently rather than profligately.

Many of the most beautifully illuminated manuscripts are prayer books. (Not all of them, though; the collection includes a book of coronation rituals from the 1200s, still consulted in the late 1500s.) Among the prayer books, please don’t miss the Book of Hours of Marguerite d’Orleans. In the folio shown, a lovely portrait of the Virgin and portion of a prayer are surrounded by exuberantly secular activity, enough to keep Marguerite, as well as modern viewers, pleasantly distracted.

In the end, does this exhibit convince us that the relationship between culture and power is “defined as much by conflict and censorship as by co-operation and patronage?” It seems, rather, to indicate that the rise of the Republic of Letters and the fall of vivid images coincided in France. But of course the French Revolution would argue against that. Enjoy the site: this is la belle France. 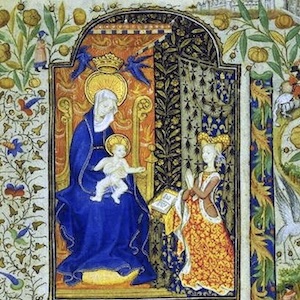