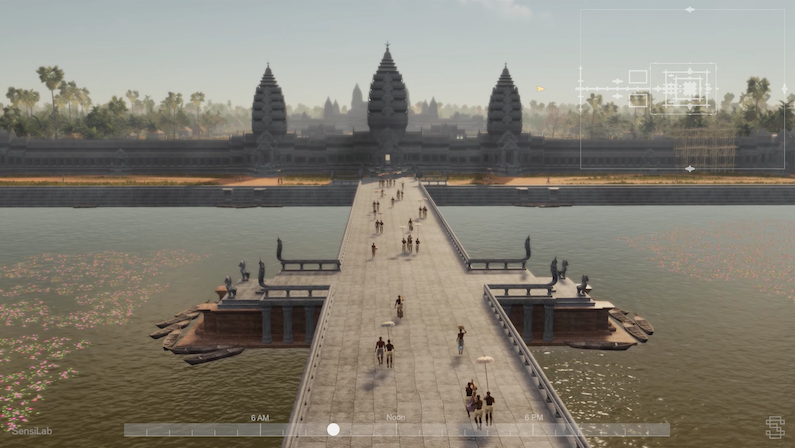 “The curated videos alone would be an engaging resource for teaching the history of Angkor, but the site goes further by providing three well designed teaching modules that make use of the sites' resources to explore scholarly themes.”

Virtual Angkor is a unique and ambitious collaboration among scholars and virtual history specialists to digitally reconstruct palace complex using available historical and archeological studies. The website represents the public-facing portion of the project - designed specifically for instructors and students to provide an immersive experience into a complete 24 hour cycle of Angkor in the 13th century.

The site's resources draw from a section of videos made from the digital reconstruction named Angkor 360°. These 360 degree panoramas enable users to look around the city as if you were standing in a particular spot at a particular time. These videos were created to work with virtual reality headsets, but the videos also work on a computer giving users an opportunity to engage with the environment. Vantage points for the Angkor 360° include housing sites, the West entrance gate, bas relief galleries, a typical Khmer village, the city's canal, rice fields, the market, a sculpture workshop, and a large thoroughfare.

A section title "Scenes" displays brief moments in the life of Angkor that highlights both flyovers revealing a large scale perspective as well as small scale daily routines of life in the city such as an oxcart convoy along a road. These curated videos alone would be an engaging resource for teaching the history of Angkor, but the site goes further by providing three well designed teaching modules that make use of the sites' resources to explore scholarly themes. The first module, Power & Place, explores how the palace's architecture functioned as a way for Suryavarman II to project his power across his kingdom. A second module, Water & Climate, examines the central importance of water to the rise and fall of a kingdom that some historians have termed a "hydraulic city." A third module, Trade & Diplomacy, deals with the intersecting networks of trade and political alliances across East and Southeast Asia in the premodern period through the marketplace of Angkor. These modules are driven by questions that students address as they navigate the resources and also feature links to supplementary scholarly readings. Taken as a whole, Virtual Angkor, is an impressive digital project that prioritizes classroom use - a promising model that will hopefully serve as an example for similar projects in the future.