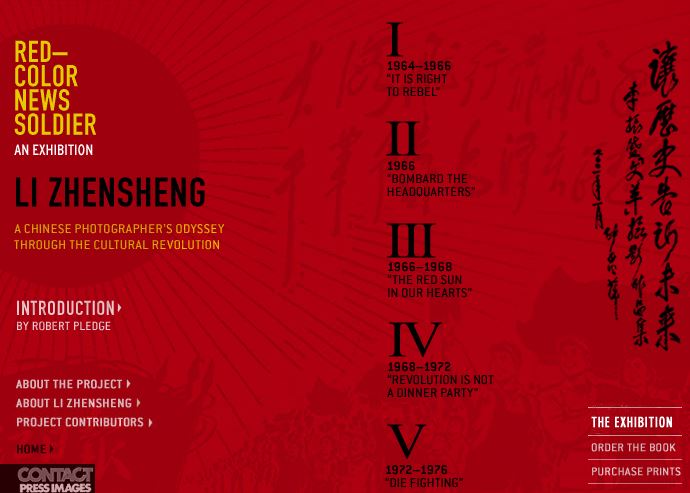 “The entire project is particularly noteworthy for the beauty of its production, its strict adherence to a chronological framework, and a staunch commitment to precise and accurate captioning backed up by additional research and verification.”

This website was originally designed to accompany the European exhibition (2003-2005) of photographs taken during China’s “Great Proletarian Cultural Revolution” (GPCR, 1966-1976) by Li Zhensheng (b. 1940), a Chinese photojournalist based in Heilongjiang province who lived through and participated in events he so meticulously documents. The 30 photographs (5 self-portraits and 25 scenes from the GPCR in China’s Heilongjiang province) featured on this site are selections from a much more comprehensive, 300-page companion volume also entitled Red-Color News Soldier.1 In this respect, the website is a sort of sampler of (and thus best used in conjunction with) the book.

The entire project is particularly noteworthy for the beauty of its production, its strict adherence to a chronological framework, and a staunch commitment to precise and accurate captioning backed up by additional research and verification. Li Zhensheng’s personality and sense of historical mission are readily apparent; indeed, they seem to be the necessary precondition for the preservation and publication of this stunning and unique collection of “negative negatives” documenting one of the most momentous and perplexing episodes not only in Chinese history, but in the 20th century more generally.

The website can be accessed via the homepage in both English and French. The Table of Contents page provides links to an introduction, background information on the project to publish and exhibit Li Zhensheng’s work, biographical information on Li Zhensheng himself, and short paragraphs on other contributors to both the book and website endeavors. Of course, much more detailed information on all of these topics (most notably, a succinct introduction by historian Jonathan D. Spence) as well as many more photographs can be found in the book.

The online component of the project, like the book, is organized chronologically into five different periods—1964-66, 1966, 1966-68, 1968-72, and 1972-76. Each time period includes a brief paragraph setting the historical scene, a self-portrait of Li Zhensheng, and five of Li’s photographs from the time. Each photograph has a rollover caption explaining the contents of the image in more detail.

Students might be asked to engage these photographs in a number of ways. On a very basic level, what do these photos tell us about the GPCR? What do they tell us about Li Zhensheng himself? Students might consider Li Zhensheng’s motivations in preserving and publishing these photographs. What, if any, were or are the risks in this sort of endeavor? Why would Li take such risks, when so many others chose not to? How did Li negotiate the demands of performing his role as a “propaganda functionary” and fulfilling his own artistic and political sensibilities and ambitions? Can these sorts of tensions be seen in the specific content or themes of Li’s photos? Which of these photographs might have been deemed “negative” or “counter-revolutionary” by the government authorities? What is the impact of photojournalism more generally? Can you think of any photographs that changed the course of events in history? Comparisons might also be made with the rhetoric (e.g., “un-American”), responses, and historical contexts associated with the McCarthy period.