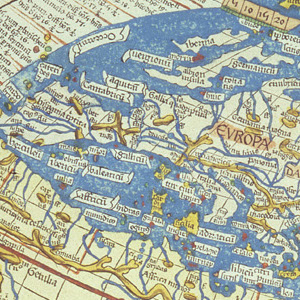 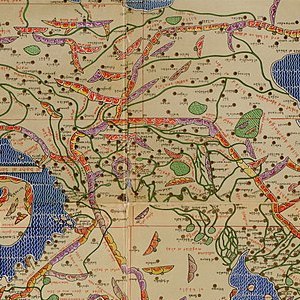 Geography provides the foundation for teaching world history. It is not only about making sure students know where “it” is at, but that they understand why and how the environment helped influence historical developments and how societies have interacted with other places over time. Maps are tools that help students investigate the past and the present as they explore historical connections. Additionally, maps can be used to uncover the worldview of both cartographers and societies of the past, as well as students themselves. The primary sources referenced in this module can be viewed in the Primary Sources folder below. Click on the images or text for more information about the source.

Geography provides the foundation for teaching world history. It is not only about making sure students know where “it” is at, but that they understand why and how the environment helped influence historical developments and how societies have interacted with other places over time. Maps are tools that help students investigate the past and the present as they explore historical connections. Additionally, maps can be used to uncover the worldview of both cartographers and societies of the past, as well as students themselves.

In teaching the world history survey, both to AP as well as regular level students, students draw their own mental maps at the beginning of the year. We talk about projections and worldview—and about how their location in the world as well as their own experiences and travels help to shape that view. Over the course of the year, students work on developing their mental mapping skills. Students explore Mercator and Peters projections to examine the worldviews inherent within others as well as their own map projections.

Building upon this, when we get to our unit on Exploration and Exploitation (1400-1800), I introduce a simplified version of Ptolemy’s historic map. A Greco-Roman scholar based in Alexandria, Ptolemy created an atlas around 150 C.E. which depicted the known world. His worldview was the dominant influence for Islamic and European cartographers during the Renaissance 1300 years later. (Note that there are no extant versions of Ptolemy’s original maps so all the maps that are considered Ptolemaic fall in this Renaissance classification despite their earlier roots.)

In pairs, students attempt to locate familiar places on his map. The class as a whole then looks at the original version of Ptolemy’s map. Students look at which regions contain the most detail and participate in a class discussion on why this is the case. We discuss the historical events in Ptolemaic times that would have influenced his worldview. For example, students notice that what is today known as Sri Lanka or Ceylon, but known to Greek scholars as Taprobane, was drawn much larger than reality. Students have speculated that this is due to the inaccuracies of maritime travelers, the importance of the island for trade goods such as spices and beads traveling to the Mediterranean world, as well as East Asia and north along the Silk routes, and the difficulties of traveling in the Indian Ocean during Ptolemy’s lifetime.

In addition, we look at specific regions of the map (for example, Africa) and look at naming, locations of places, and included features. What places are “blank spaces” in the worldview of the times? Why? Does this mean that there is not history happening there if Greco-Romans, Europeans and/or Arabs do not know the place?

We then look at a map by Moroccan born map-maker al-Idrisi. Islamic cartography during early Renaissance times builds upon Greco-Roman knowledge, including Ptolemy’s works, as well as Islamic records from trade, travel narratives, and empire. Interestingly, al-Idrisi was commissioned by King Roger II of Sicily to create these works, showing the integrated Mediterranean world of the 12th century.

Students work in pairs again with both maps side by side highlighting the similarities and differences between the two maps. More advanced students will be able to speculate what the shapes used on the maps represent and make comments about what is omitted. How could they tell al-Idrisi’s map followed Ptolemy’s? Have students think about how al-Idrisi may have gathered his information about northern Africa. Have them notice the difference in terms of the eastern ocean—Arab navigators knew it was open east of China and yet the shape of East Africa remains under the influence of Ptolemy. I then ask students to each pose three questions they would ask the respective cartographers that would allow them to better understand the world of the mapmaker.

Finally, students compare one of these Ptolemaic maps to a contemporary world map and look at what features are most accurate and which ones show the most distortion. They can then consider the continuities of the next millennium that allowed this map to remain authoritative for so long. Also arising in the discussion are the global historical events that shaped future depictions. The inclusion of the Americas (and later Oceania and Antarctica) on future maps as well as the refinement of the coastlines of Afro-Eurasia is discussed. Students also bring up the point that satellite photography today can eliminate overt perspective from a map, but then ask if it makes it more difficult to gauge worldview. These ideas allow for a wonderful discussion of the change in technology over time.

Later in the year, when we look at a 19th-century map entitled Clark’s Chart of the World, students come back to these early discussions of maps and worldviews. Clark’s map provides a color-coded view of the world from the perspective of the British Empire with a key showing who was savage or civilized. The discussion is all the richer then since we have looked at maps over time as an indicator of both cultural values as well as historical and geographic knowledge.

Working with these types of primary sources permits students to experience history in a unique way—one that combines both visual and textual sources of information. Having used these maps for many years now, I find that the most important thing is to show the maps in color. If students can look at them closely, it does make a difference. They have worked for students at all levels, though the types of questions I use does vary based on the level and age of students.

As students look at these maps, they come to understand the exchange of information between societies in new ways. They are able to interpret maps as historical texts and compare and contrast them in the same ways as they would written texts. They learn to pose questions that are analytical, better enabling them to answer analytical questions as well. It also allows the class to have meaningful discussions about worldview and the evolution of historical knowledge.

On a lighter note, students see their own mental map depictions of the world as being more inclusive than Ptolemy’s so that is empowering for them. I personally love to explore maps as historical documents and think that this exercise helps to excite students to do the same. As part of a unit assessment, they can choose to compare a Ptolemaic map with another one from 1400 -1800. I am amazed at how many choose this option and I am convinced that it is because there is an inherent fascination with historical maps, especially after this lesson.