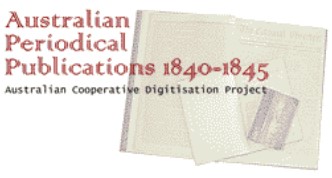 “The manner in which newspapers in this period created transnational links, both in reporting news from elsewhere and in systematically including extracts from other papers, makes them an especially pertinent source for the study of world history.”

This project provides access to 69 Australian periodicals first published between 1840 and 1845. The site provides a variety of routes of access to its material. The browse function lists periodicals by either title, date of publication, or subject (”topics” and “places”). The search function allows the collection to be searched by either title or table of contents. In addition, one publication, the Colonial Literary Journal and Weekly Miscellany of Useful Information (Sydney, 1844-1845) has had text recognition performed on the entire journal, which allows its full text to be searched. The digitized files are available in PDF format. Since the copies were produced from microfilm, they vary in quality but are generally legible. There are no transcriptions available.

The subject browse is particularly useful for teachers in world history courses. It arranges the publications under both “topics” and “places.” Topics such as “Immigration and Emigration,” “Temperance,” “Friendly Societies,” and “Science” immediately suggest comparative ways in which the material could be used with similar material in a global context. “Places” illustrates the global reach of newspapers in the middle of the 19th century. While most of these categories relate to regions within Australia, this browse function also points to papers such as the Colonial and Asiatic Review (1852-53) and The Colonial Magazine and East India Review (1849-52). The manner in which newspapers in this period created transnational links, both in reporting news from elsewhere and in systematically including extracts from other papers, makes them an especially pertinent source for the study of world history.

There is no supplementary material available on the site to put these publications in context. This is a slight drawback, for while the material does stand alone, it would be enhanced by even the briefest contextual discussion. The Satirist and Sporting Chronicle (Sydney, 1843), for example, caused a massive scandal when it was published, and the editors became the first men in Australia to be prosecuted for obscene libel. This paper lends itself to an analysis of the nature of colonial scandal and respectability, but without background knowledge about the Satirist, it would not necessarily occur to teachers and students to use it in this way. The best use of this site can therefore be made with the help of some supplementary reading.